Strix nebulosa
Strigiformes
Owls have an upright posture, large heads, forward-facing eyes, and strong, sharp bills with a pronounced downward curve. Most are nocturnal or semi-nocturnal. Exceptional low-light vision and keen directional hearing enable them to pinpoint the location of prey. Owls typically have extensive feathering, with feathers often extending to the tips of the toes. Cryptically colored and patterned plumage helps to camouflage them as they rest by day. Their dense, soft feathers allow them to fly silently. The world's two owl families are both represented in Washington:
Strigidae
Most of the world’s owls belong to this family. The differences between the two owl families are primarily structural. The facial disks and heads of typical owls are more round than those of Barn Owls, and their legs are generally shorter.
Rare resident east. Irregular winter west.
Source of Bird Audio

Not surprisingly, Great Gray Owls are large and gray. The plumage of Great Gray Owls is finely mottled and streaked, and the owls have distinctive black and white markings on their throats. They have large heads without ear-tufts, large facial disks, and yellow eyes. Their plumage is especially fluffy and thick, which makes them look larger-bodied than they really are. Although they are taller and have longer wingspans than Great Horned Owls, they weigh on average 15% less.

Great Gray Owls hunt by day as well as night, especially during the summer when they are raising chicks. They typically use a sit-and-wait hunting style, watching from a perch and swooping down silently on unsuspecting prey. Sometimes they fly low over open areas, scanning for prey. They can locate prey by sound alone and will break through crusted snow to get at rodents tunneling more than a foot beneath the surface. Sometimes Great Gray Owls form loose groups in winter where there is a concentration of prey.

Small mammals, especially rodents such as voles, pocket gophers, and mice make up most of the Great Gray Owl's diet.

Monogamous, long-term pairs nest in abandoned hawk or raven nests, broken-topped trees, or on man-made nesting platforms. They do not add any material to the nest and may reuse the same nest several years. Clutches typically contain 2-5 eggs but may be larger when prey is abundant. The female incubates the eggs for about 30 days, while the male brings her food. The female broods the young for 2-3 weeks after they hatch, while the male brings food to the female and the owlets. After 3-4 weeks, the young begin to climb about on nearby branches; they can fly 1-2 weeks later. Sometimes the female departs once the young begin to fly; sometimes she remains and helps the male, who continues to feed the young for up to three months.

Great Gray Owls often move down-slope in winter. This movement may be tied to prey abundance, snow depth, or a combination of both. Some winters, Great Gray Owls wander far south of their normal range.

Much of the Great Gray Owl's range is remote and protected from human disturbance; however populations have probably declined in the southern part of their range due to loss of habitat. The availability of nest sites may be a limiting factor, especially in areas that have been logged. There are few places in Washington that provide the appropriate habitat for Great Gray Owls, and the state has very few nesting records. Great Gray Owls are currently included on the Washington Gap Analysis Project's at-risk list.

Great Gray Owls breed in eastern Okanogan and western Ferry Counties and probably elsewhere in the eastern part of the state. They can be found rarely as winter visitors in western Washington lowlands and other parts of the state. 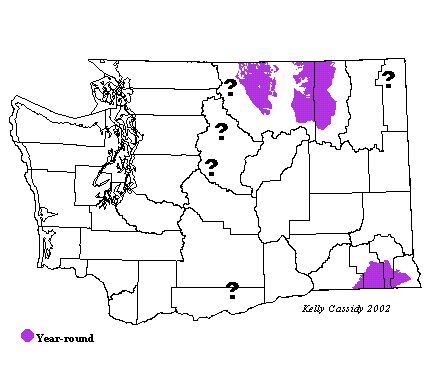