Dendroica palmarum
Passeriformes
Members of this diverse group make up more than half of the bird species worldwide. Most are small. However their brains are relatively large and their learning abilities are greater than those of most other birds. Passerine birds are divided into two suborders, the suboscines and the oscines. Oscines are capable of more complex song, and are considered the true songbirds. In Washington, the tyrant flycatchers are the only suboscines; the remaining 27 families are oscines.
Parulidae
This large group of small, brightly colored songbirds is a favorite of many birdwatchers. Wood-warblers, usually called “warblers” for short by Americans, are strictly a New World family. Most of the North American members of this group are migratory, returning in the winter to the tropics where the family originated. Warblers that nest in the understory tend to have pink legs and feet, while those that inhabit the treetops usually have black legs and feet. North American males are typically brightly colored, many with patches of yellow. Most North American warblers do not molt into a drab fall/winter plumage; the challenge posed to those trying to identify warblers in the fall results from looking at mostly juvenile birds. Their songs are generally dry, unmusical, often complex whistles (“warbles”). Warblers that live high in the treetops generally have higher-pitched songs than those that live in the understory. Warblers eat insects gleaned from foliage or captured in the air. Many supplement their insect diet with some seeds and fruit, primarily in fall and winter, and some also eat nectar. Most are monogamous. The female usually builds the nest and incubates four to five eggs for up to two weeks. Both members of the pair feed the young.
Rare winter west. Casual migrant east.

Palm Warblers are mostly brownish birds, with distinctive, yellow undertail coverts. They have small white corners on their tails that are visible in flight. Eastern birds are bright yellow below with rufous streaks on their breasts; western birds are lightly streaked and drabber in color. They have a dark eye-line through each eye. Adults in breeding plumage have rufous crowns and yellow throats.

Palm Warblers breed on the edges of boreal-forest bogs. During migration, when they are seen in Washington, they are usually found in hedgerows, thickets, and other edge habitats along the coast, often frequenting thickets of non-native Scots broom.

Outside of the breeding season, especially during migration, Palm Warblers may join mixed flocks. They are usually found fairly low, in the understory or on the ground. The almost constantly bobbing tail is an excellent field mark.

Monogamous pairs typically nest on or near the ground. Nests off the ground are often located close to the trunk of small spruces. The female builds an open cup of grass and bark, and lines it with feathers. The nest is usually concealed by a clump of grass or sphagnum moss hummock. Both members of a pair may help incubate 4 to 5 eggs for about 12 days. They both feed the young. The young typically fledge at about 12 days and can fly short distances within a few days of fledging. Pairs generally raise two broods each year.

Palm Warblers migrate from their breeding grounds in northern Canada to their wintering grounds in the southeastern United States. It is during fall migration and early winter that they are most likely to be found in Washington.

Numbers appear to be stable. There are currently no major threats to Palm Warblers' habitats as most of their breeding range is remote, and they often winter in open and disturbed areas. They are fairly common within their normal range.

Palm Warblers are rare visitors in western Washington, mostly during the fall, where they are uncommon on the outer coast, especially near Ocean Shores (Grays Harbor County). They are considerably more rare in Puget Sound, although one Palm Warbler wintered at the Union Bay Natural Area in Seattle (King County) in 2001. 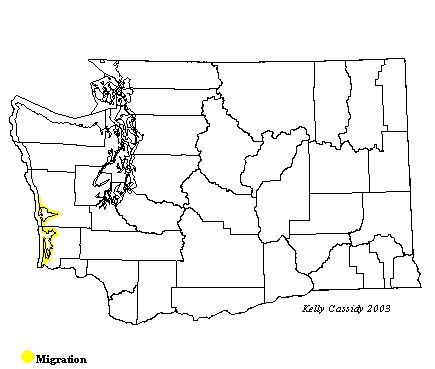