Phalaenoptilus nuttallii
Caprimulgiformes
Adapted for aerial insect foraging, most members of this unusual group have a short, weak bill with bristles at the base and a very large mouth opening. Typically nocturnal or crepuscular (active at dusk and dawn), they are more often seen than heard, as their calls pierce the night loudly and repeatedly. During the day they rest quietly on the ground or on a branch. Their soft plumage is usually brown or gray and highly cryptic. The name goatsucker comes from an ancient Greek myth that claimed they suckled milk from goats. This myth is unfounded and perhaps started as an explanation for the birds’ wide gapes and their low flight over pastures in the evenings. Just one family is found in Washington:
Caprimulgidae
These unusual-looking birds have flat heads and very short bills with extremely wide gapes. Many have rictal bristles around their beaks; these specialized feathers may help funnel prey into their mouths as they forage for flying insects. Many swallow stones as grit to help grind up the hard exoskeletons of their insect prey. They have large, dark eyes that reflect light, and they are often spotted on roadsides when their eyes shine from car headlights. They generally have long wings and maneuver well in flight. Although they spend much time on the ground, they have short legs and small, weak feet. When perching on tree limbs, they usually perch lengthwise along the branch, not crosswise like most birds. They do not usually build nests, but lay two eggs on the bare ground. Both parents help raise the young.
Fairly common summer resident east.
Source of Bird Audio

The highly cryptic Common Poorwill is heard far more often than it is seen. It is smaller than a nighthawk, with a shorter tail. Common Poorwills are mottled gray and brown with a white band across the chest and a pale collar around the neck. The upperparts vary from dark brown to light gray. Most, if not all, of the Common Poorwills in Washington are dark. Like other members of the family, Common Poorwills have large heads, short necks, and little difference between males and females.

These nocturnal birds hunt from the ground, looking up into the sky and flying up to grab prey. They often hunt from roadsides and can be spotted when their eyes reflect in car headlights. The Common Poorwill was the first bird discovered to hibernate, or go into torpor. The birds' temperature can drop to as low as 41 degrees, and their rate of respiration is reduced up to 90%. They can remain in this state for days or weeks at a time. When vocalizing, Common Poorwills give repeated calls that sound like, 'Poor Will,' followed by a weak, lower, third note. The calls are almost always made from the ground.

The male calls from the ground or a low perch to attract a female. Both parents incubate two eggs, which are laid on bare ground. No nest is built, but sometimes a slight scrape is present. The eggs are often placed in the shelter of a shrub or rock. If disturbed, the eggs (or young) will be moved. Incubation lasts for 20 to 21 days. Once the eggs have hatched, both parents brood and feed the young regurgitated insects. The young begin to fly at 20 to 23 days. Pairs often raise two broods a year. It is not uncommon for the female to be incubating the second clutch while the male is still tending the first.

Common Poorwills leave in late August or early September and migrate to Mexico. They return in April.

This cryptic species is very difficult to survey accurately, although recent studies show it to be more abundant in many places than was previously thought. It is widespread, and numbers are probably stable, although more study is needed to get a better sense of the population status.

Common Poorwills are very difficult to see but are common in canyons and shrubby areas at the ecotone where the Ponderosa pine forests and shrub-steppe habitats meet in eastern Washington from late April through August. They can also be found in mountainous sagebrush habitat and in the Columbia Basin. Migrants have been recorded in western Washington as well but are extremely rare. 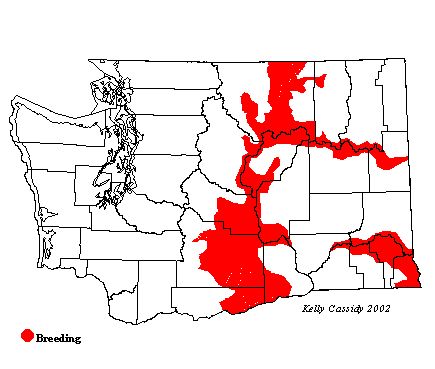